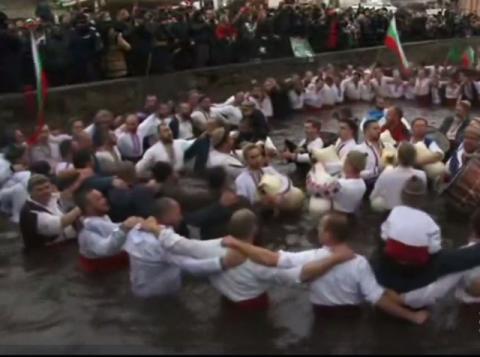 Dozens of men set foot in the waters of Tundzha river in Kalofer for the traditional ritual of saving the cross, and to play the famous male ethnic dance of the Epiphany.

Due to the pandemic, there was no official organization, but many people gathered to follow tradition. Law enforcement forces tried to stop the dance, but it still happened.

People from Kalofer sang folk songs and danced in the icy waters, despite the measures.

Today, the mayor of Kalofer did not enter the river to set an example and follow the regulations. After the cross was caught, it was handed over to the youngest participant in the dance.

During the dance, a woman entered the waters for the first time.

There was a call for the  tourists this year no to attend due to anti-epidemic measures.

The ritual of throwing the Epiphany Cross began in the nearby town of Shipka. The locals are dressed in traditional costumes and singing, the people entered the Dzhanguritsa River. Tradition dictates that after playing the dance in the icy waters, the cross be thrown in the water, which is then given to the youngest participant in the ritual.