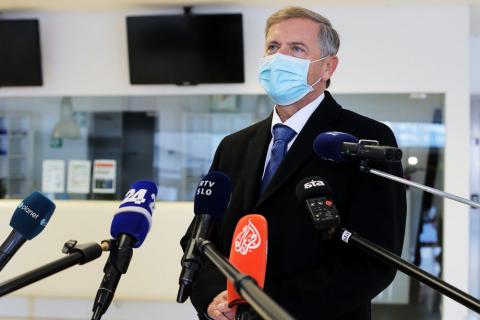 Ljubljana – An informal coalition of centre-left opposition parties will table a motion of no-confidence in the Janez Janša government on 15 January, Karl Erjavec, the leader of the Pensioners’ Party (DeSUS), who has been tipped for prime minister-designate, announced on Tuesday.

Erjavec, addressing reporters in front of the parliament building after a meeting of the Constitutional Arch Coalition (KUL), said he expected the motion to be signed by 43 MPs, three short of an outright majority needed for the vote to succeed.

Apart from DeSUS, KUL also includes the Marjan Šarec List (LMŠ), Social Democrats (SD), the Left and the Alenka Bratušek Party (SAB), which do not have enough MPs between them for the motion to succeed.

They would need to win over potential defectors from the coalition, in particular the centrist Modern Centre Party (SMC), which they do not appear to be succeeding at.

Erjavec said they would go ahead with the motion regardless of how many MPs signed on to it, but also said that informal talks would continue with SMC representatives and he expected a majority of 46 votes to be mustered in the secret ballot.

After a party council session last week, the SMC said it was not supporting Erjavec for prime minister-designate. Still, Erjavec invited the party to talks, but said today he had not yet received a response.

Four of the five centre-left KUL parties have already supported Erjavec’s bid to try to form an alternative government, while the Left will take its decision on Wednesday. Erjavec is confident they will support him.

He expects the required majority to be clinched in the secret ballot in parliament to elect a new prime minister. “There’s quite some time left until the no-confidence motion is filed,” he said, adding that it was vital for the National Assembly to say what politics it wanted going forward.

He said the purpose of the motion was not to bring down the government, but to “stop the destruction of the country […] the government is failing in the epidemic, independence of institutions is jeopardised, media freedom is being interfered in”.

Adding that they would like to stop the country’s demonisation, he repeated that they did not want Slovenia to be in a group of non-core EU countries such as Hungary or Poland.

While DeSUS own MPs have not made their position fully clear after the party formally resigned from the coalition last month, Erjavec counts on their votes as well. He expects four of the five to support the no-confidence motion as he meets them next Tuesday.

The remaining four KUL parties have 39 MPs in the 90-strong legislature.

Erjavec said that Jože Podgoršek was violating DeSUS’s rules by failing to resign as agriculture minister following the party’s quitting the government, which would be put to party bodies for discussion. He expects him to be expelled from the party.

The other DeSUS government member, Tomaž Gantar, stepped down as health minister on 18 December, a day after DeSUS left the ruling coalition.

Commenting for the STA, Podgoršek said it was on Erjavec’s initiative that DeSUS bodies decided for the two ministers not to quit the government, leaving it up to PM Janša to decide on the matter. This was why he stayed on in the government.

Asked about his further staying in the ministerial post, Pogoršek said he would continue to act constructively and in the interests of the state as he had so far.

Erjavec said earlier that the resolutions of the party council and executive committee were perfectly clear. He said the decision was taken mainly for the sake of the health minister so that he would not be reproached for abandoning the government overnight considering the situation. They expected Podgoršek so follow suit when Janša was to give up Gantar.

The post Opposition to table motion of no-confidence in govt in mid-January appeared first on Slovenia Times.