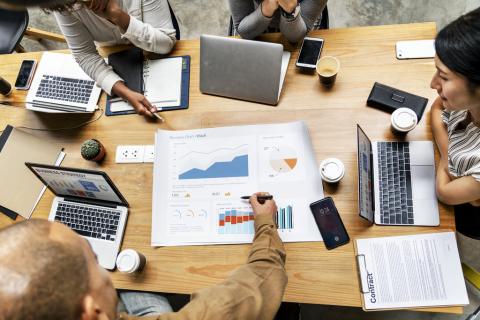 The second wave of the COVID-19 epidemic strongly affected particularly service activities. Turnover in trade declined in October, and in November the decline continued according to preliminary data. As a result of containment measures, turnover in accommodation and food service activities dropped significantly in October, as in the first wave of the epidemic. The epidemic and the measures to contain its spread also had a significant impact on prices of some consumer goods - in addition to the year-on-year lower prices of energy, at the end of the year price rises in services and food moderated significantly and prices of semi-durables (clothing and footwear in particular) fell significantly. With the temporary relaxation of some measures, confidence in trade and services and among consumers, which had deteriorated since the beginning of the last quarter, improved somewhat in December. The impact of the second wave on confidence and activity in construction and manufacturing was smaller. This is also indicated by electricity consumption and freight traffic on Slovenian motorways, which in December also fell significantly less year on year than in the spring. Unemployment increased somewhat, which is a consequence of modest demand for labour and seasonal factors.

Graphs of the week and their interpretation are available on our website.

The year-on-year fall in weekly electricity consumption remained significantly smaller than in the spring. In the third week of December, electricity consumption was 3% lower year on year, as in several previous weeks (in the spring more than 15%). Similar year-on-year declines in weekly consumption were also recorded in the majority of our main trading partners. In Austria, consumption dropped by 5% year on year, approximately half less than in previous weeks. In Croatia, where in the last few weeks consumption has mostly been similar to that last year, the year-on-year decline was 4%. In Italy, it was somewhat smaller (3%). Consumption in Germany and France was roughly the same as last year.

In the week before the New Year, freight traffic on Slovenian motorways was significantly higher year on year, which is mainly a consequence of a more favourable distribution of public holidays in 2020. Freight traffic on Slovenian motorways was 84% higher year on year between 21 and 27 December, despite the exclusion of holidays from the comparison, which is mainly related to the smaller volume of freight traffic in the comparable 52nd week of 2019. That week was two days closer to the turn of the year, when freight traffic tends to slow down considerably, and had one fewer working day and an unfavourable distribution of holidays in the middle of the week, especially for international transport.

The number of registered unemployed persons increased somewhat by the end of December, after maintaining a similar level in the previous three months. Following the strong growth in the first wave of the epidemic, the number of registered unemployed had been gradually falling since mid-year after the adoption of intervention job retention measures and the lifting of restrictions; from September to November, it remained roughly unchanged. In December, it rose slightly - according to ESS unofficial (daily) data, 87,180 persons were unemployed on 30 December, which is 3.6% more than at the end of November and around 16% more than in the same period last year. Amid the retention of intervention measures, the December increase was not much different from that of previous years, when it had mostly been due to seasonal factors. The smaller increase than in the spring months was also due to a smaller fall in economic activity than during the first wave.

Economic sentiment improved slightly at the end of the year, after deteriorating since the declaration of the second wave of the epidemic at the beginning of the last quarter. The December improvement in confidence in service activities, retail trade and among consumers was mainly attributable to the temporary relaxation of some service activities and the opening of non-essential shops before the Christmas and New Year holidays. Confidence also improved in construction, which, together with manufacturing, remains one of the less affected sectors. In all activities confidence remained above the levels seen during the first wave of the epidemic.

Year-on-year fall in consumer prices deepened somewhat at the end of the year. The epidemic and the measures to contain its spread have, due to lower demand, strongly affected the movement of some prices of goods and services. Year-on-year growth in services prices eased markedly and was the lowest since February 2016 (0.2%). Food price growth also slowed considerably, which is related to higher food supply due to the good harvest, lower activity of hotels and restaurants and the complete closure of some other activities (schools). Prices of semi-durable goods have also fallen notably in recent months, largely due to lower prices of clothing and footwear. The lower prices were however still mainly due to the year-on-year decline in oil product prices, but due to the current monthly growth, their negative contribution was smaller than in previous months.

At the end of last year, the situation on euro area bond markets remained favourable despite the deterioration in epidemiological conditions. With investors expecting that economic policy makers will extend existing measures for as long as necessary and adopt new ones if necessary, the yield to maturity of the Slovenian bond declined by slightly more than 20 basis points in the last quarter, to 0.12%. The spread to the German bond narrowed somewhat less markedly, but at 45 basis points it was lower than before the outbreak of the epidemic.

In October, turnover in trade dropped further with the closure of some non-essential shops and due to other containment measures; in November, it continued to decline in most segments according to preliminary data. In October, turnover dropped in all three main segments, the most in the sale of motor vehicles, where it had also fluctuated the most in previous months. Turnover in wholesale and retail sale also declined slightly. Within the latter, a sharp fall was recorded for the already low sales of automotive fuels, which in the first ten months of 2020 also lagged the most (almost by a quarter) behind the results from 2019, which was a consequence of lower freight transport, lower tourist transit in the summer and lower sales of fuels to households. As at the beginning of the first wave of the epidemic, retail sales of food strengthened at the beginning of the second wave. Sales of non-food products via mail order or the internet also remained high.

In October, turnover in market services declined further. With the re-closure of restaurants and hotels, turnover, as in the first wave of the epidemic, declined the most in accommodation and food service activities, where it had strengthened the most in previous months, also due to the redemption of tourist vouchers. Turnover also dropped in information and communication activities, reflecting a fall in both telecommunications and computer services, and slightly also in professional and technical activities (largely due to a fall in architectural and engineering services). Despite a further decline in travel and employment agencies, turnover in administrative and support service activities strengthened, for the most part as a consequence of growth in rental and leasing activities and office administrative and support activities. In transport, turnover growth slowed again slightly. Total turnover in market services was around 7% lower than before the outbreak of the epidemic in March.

Growth in dwelling prices moderated in the third quarter; after the containment measures were lifted, the number of transactions in dwellings increased significantly, but was similar to that one year before. In the first nine months of 2020, prices were 4.4% higher on average year on year (in the third quarter 3.3%), which indicates a slowdown in price growth compared to the last three years (with the average annual growth close to 8%). The price increase in the first nine months of 2020 was largely a consequence of higher prices of existing dwellings, particularly flats (5.5%). Prices of newly built dwellings were also higher year on year, but the transactions in these dwellings accounted for less than 3% of all transactions. Among them, prices of family houses recorded strong growth, but these (along with prices of existing family houses) were the only prices that lagged behind those of 2008 (by 14.5%).

Slovenian industrial producer prices remained unchanged year on year in November. The low price growth on the domestic market, which remained at around 1%, was to a great extent a consequence of the year-on-year lower prices in the intermediate goods group and more than 2% price growth in other groups. Energy prices again increased the most (3.8%), but their growth is gradually easing. The year-on-year fall in Slovenian producer prices on foreign markets remained at around 1%. Year on year, prices were down in all groups except the group of durable consumer goods, where they were almost 1% higher year on year due to somewhat more pronounced current growth in November.