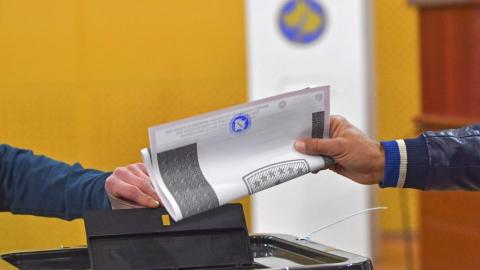 A man in Pristina votes at a polling station in the early parliamentary elections on October 6, 2019. Photo: EPA-EFE/GEORGI LICOVSKI

The decision came hours after the Constitutional Court ruled that Avdullah Hoti's current coalition government was illegitimate because it was voted into office with the help of an invalid vote cast by an MP with a criminal conviction.

While the verdict paved the way for the Acting President to call a new election, it has also sparked a separate debate on whether the leader of the main opposition Vetevendosje movement, ex-PM Albin Kurti, is eligible to run for parliament.

At the time, the party opposed the then government's agreement on border demarcation with Montenegro and another agreement reached with Serbia, as part of the EU-facilitated dialogue, on establishing a semi-autonomous association of Serb-majority municipalities in Kosovo.

Vetevendosje officials maintained that Kurti will be part of the candidates' list despite that conviction.

"The attempt to create non-existent, unfounded and inaccurate circumstances is unacceptable and erroneous… The election day will be a solemn manifestation of democracy when Vetevendosje, with a list led by Albin Kurti, will win strong popular support," Albulena Haxhiu, a former Vetevendosje Justice Minister, said.

However, Faton Fetahu, a lawyer who worked on cases sent to the Constitutional Court, says the verdict prohibits Kurti from running in the elections, or his party from pushing his candidacy to become Prime Minister.

"The Constitutional Court has...