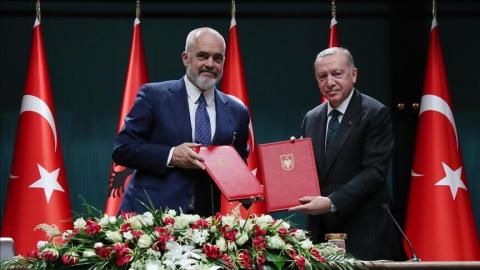 Turkey and Albania on Jan. 6 signed an agreement to upgrade bilateral ties to a strategic partnership level.

"[...] We just signed a joint political declaration on the establishment of the High-Level Strategic Cooperation Council. Thus, we have raised our relations to the level of strategic partnership," Erdoğan said.

The move toward strategic cooperation will help further the cooperation between the two countries in every field, he added.

*Recalling the two earthquakes that hit Albania in September and November last year, Erdoğan once again extended his condolences to the families of those killed in the deadly incidents and wished a speedy recovery to the injured.

He said that the construction of 522 new housing units by Turkey in Albania is a positive gesture.

"We are planning to increase investments in infrastructure and tourism in Albania. We want to lift our economic cooperation to a new dimension," Erdoğan said.

The Turkish president also announced the construction of a new hospital in Albania within three months.

Erdogan noted that Turkey and Albania share the same stance on fighting FETÖ.

He added that the two brotherly nations will not allow the FETÖ to poison their relations.

FETO and its U.S.-based leader Fetullah Gulen orchestrated the defeated coup of July 15, 2016 in Turkey, which left 251 people killed and nearly 2,200 injured.

Ankara also accuses FETÖ of being behind a long-running campaign to overthrow the state through the infiltration of Turkish institutions,...