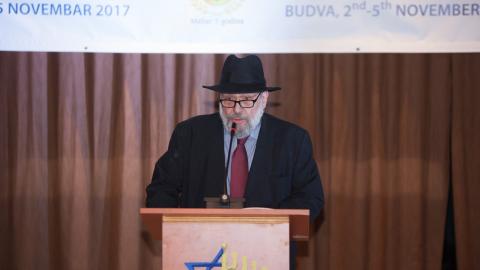 Jews barely figure. According to the 2011 census, the Jewish community counts a mere 110 people, although the World Jewish Congress estimates 400 to 500 Jews now live in the country.

"Anti-Semitism has never become or been part of the state ideology in Montenegro, so it has never taken root among citizens," the rabbi said. "Montenegro is among the few countries in the world where there is no public manifestation of anti-Semitism or negative attitude towards the Jewish people," he added.

The small community, one of the youngest Jewish communities in the world, having been officially registered in July 2011, has no synagogue. The World Jewish Congress says only about 10 per cent of Jews in Montenegro are actively involved in the community.

But despite their tiny number, they are active in different fields, especially in organizing the annual "Mahar Conference", a central meeting point for Jewish communities in the Balkan region.

The conference aims to prevent the assimilation of Jews in the region and establish closer cooperation between its Jewish communities.

In January 2012, the Jewish community and the government signed the Act on Mutual Relations whereby Judaism was recognized as the fourth official religion of Montenegro.

Prelevic said the act guarantees Jews in Montenegro full autonomy in regulating their religious and national relations to the extent that they do not conflict with the law.

"The Jewish community has an excellent relationship with state institutions. We receive a certain budget on an annual level. And, as well as recognizing Judaism as an official religion, the state has allocated land for the construction of a synagogue in the capital, Podgorica," Prelevic explained.