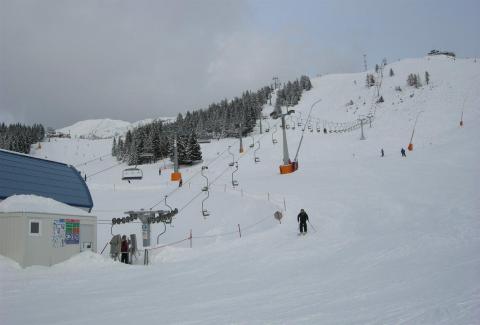 Ljubljana – As daily coronavirus cases hit a new record earlier this week, the government decided on Thursday that schools and kindergartens will remain closed at least until 18 January. While the majority of restrictions were extended, ski lifts will have to shut down once again tomorrow and there will be some minor changes to entering Slovenia.

It became clear at yesterday’s meeting of government and teacher representatives that the government and medical experts were not in favour of reopening schools next week, not even for children in the first three years of primary school, which many had expected to happen already on 4 January.

The exception to the schools closure are special needs children, who went back to school on Tuesday in line with a recent Constitutional Court ruling.

The government intends to continue the dialogue and draft a proposal of a potential reopening model to send it to headteachers for discussion, Covid-19 spokesperson Jelko Kacin said after the government’s session.

After closing before New Year’s and reopening on 1 January, ski centres will have to close again on Friday for all except professional athletes, who will however need a permit from the Infrastructure Ministry.

Minister Jernej Vrtovec asked skiers and ski lift owners for understanding, saying the epidemiological situation was worrying and so were the projections.

Injuries could put more pressure on hospitals as the number of Covid-19 hospital admissions is expected to rise, the minister explained after the government session.

Vrtovec also pledged the state would help ski lift owners as it had before.

The Association of Slovenian Ski Lifts said it had in a way expected the decision and announced it would ask the government to cover their loss of income.

The ski season in Slovenia is relatively short, ending in mid March or early April, so not working now is “a financial catastrophe”, it said in a release.

Also as of Saturday, training will be allowed only for top and professional athletes, and for younger athletes.

No changes were meanwhile made to restrictions applying to movement across municipal borders, which remain in place, or to public transport, which continues to run in the limited fashion.

Also as of Saturday, it will be possible to enter Slovenia with a negative PCR or rapid test, while rapid testing introduced recently at five border crossings with Croatia will no longer be available.

People entering Slovenia will have to produce a negative rapid or PRC test, and while the rapid tests have to be carried out in an EU or Schengen country, the PCR tests could also be carried out in a third country, more precisely in a few labs in Serbia and Bosnia as some other countries, explained Interior Minister Aleš Hojs.

The government moreover removed Finland from the red list of countries, which means that persons arriving from Finland will no longer have to quarantine or produce a negative coronavirus test on the border.

Moreover, an additional exception has been added to the list of those not requiring entry into Slovenia. As of Saturday persons crossing the border for the purposes of education will no longer have to prove they are virus free or quarantine.

There are no changes to the general quarantine rule, which says that a Slovenian citizens can end quarantine after five days with a negative test.

However, as of Saturday, the same rule will apply to those non-Slovenian nationals who have a permanent or temporary residence in Slovenia.

The government also extended the shutdown of non-essential shops and services by another week, that is until 15 January, but added new exceptions to the existing ones.

The list of exceptions will now also include surveying services, cleaning services and pedicure, as well as construction works.

Moreover, museums and galleries will also have to shut their doors again on Saturday, while libraries will remain open for pick-up of pre-ordered books.

School, kindergarten opening to proceed as planned on Tuesday