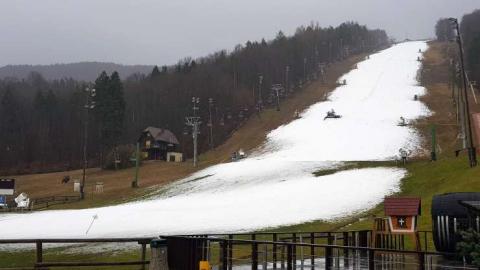 Maribor – Maribor will not host the women’s alpine skiing World Cup circuit for the Golden Fox Cup for the second year running due to a lack of snow amid mild and wet weather. The two-day event will move west to Kranjska Gora again.

The organizers’ last hopes to keep the event in Maribor were dashed as FIS World Cup ladies’ technical events race director Markus Mayr inspected the race course at the foot of the Pohorje hills on Friday.

Even though he was asked to come a day later, the forecast for a drop in temperatures that would have allowed the organizers to make the piste ready to the standard failed to materialise.

Mayr then also inspected the alternative venue in Kranjska Gora, which holds the annual Vitranc Cup for men in March.

The problem there was an excess of fresh snow that has fallen in recent days.

“The snow is great for skiing, but not for a competition. It’s simply not hard enough,” said Mayr, but was fully confident that the organizers from Maribor and the local team would get the Podkoren piste ready for the event.

Soon after, the International Ski Federation (FIS) gave its go ahead for the 57th Golden Fox Cup to be held in Krajska Gora on 16 and 17 January.

Instead of the usual slalom and giant slalom events, it will feature two giant slalom races, the discipline being limited to one to reduce the number of participants amid coronavirus concerns.

Over the past ten years, the Maribor cup had to be moved to Kranjska Gora five times due to unseasonably balmy weather.

Meanwhile, Kranjska Gora was unable to hold its Vitranc Cup last year due to the coronavirus pandemic.