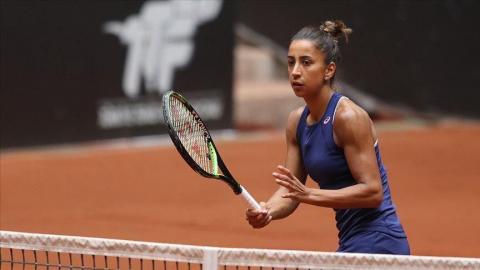 Çağla Büyükakçay, one of the three Turkish players competing in the 2021 Australian Open's qualifying stage, won her first game on Jan. 10 to advance to the second round.

She will next play Ana Konjuh of Croatia, who won 6-2,-67-6-4 against Anna-Lena Friedsam of Germany.

In addition to Büyükakçay, Pemra Özgen will be on court to play in the first round in the women's competition, while Cem İlkel will appear in the men's qualifiers.

Number 212 Özgen will take on Ukraine's Anhelina Kalinina, who is ranked 163.

İlkel is currently in the 219th place in the ATP rankings and will compete against world number 26 Peter Gojowczyk from Germany in the first round.

The opening Slam of the year has been pushed back three weeks to Feb. 8 over difficulties caused by the coronavirus.

All players must undergo a mandatory 14-day quarantine on arrival, during which they will constantly be tested for COVID-19 but allowed to train for five hours a day in a bio-secure bubble.

The men's and women's qualifiers will be held in Doha and Dubai respectively from Jan. 10 to Jan. 13, with players arriving in Melbourne from Jan. 15 on special charter flights.