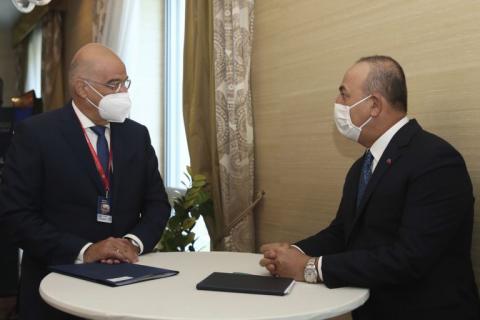 After a year of Turkish threats to Greek sovereignty on land, at the Evros border region, and at sea, in the Aegean and Eastern Mediterranean, the Greek foreign ministry in a curt statement announced that the 61st round of Greek-Turkish «exploratory talks» will begin on 25 January in Istanbul.

The meeting was set amidst strong international pressures and following the invitation of Turkish Foreign Minister Melut Cavusoglu.

Greek analysts have underlined that one of Ankara's key motivations in pursuing dialogue now after many months of denial and provocations is that the December EU summit decided that it wil again review the prospect of sanctions against Turkey at the 25 March, 2021 EU summit.

Under the current circumstances, however, following the dangerous summer flare ups in the Mediterranean which are widely acknowledged as a serious threat to peace in a geopolitically critical region, there will be stiff international pressure for a wider-ranging dialogue that will put a number of Turkey's demands on the table with a view to negotiating certain Greek sovereign rights.

There, a critical objetive of both sides in the quite conceivable event of a deadlock or even breakdown of talks will be to avoid being held accountable, at least exclusively, in a resulting blame game.

The talks began in 2002, when Pasok's Costas Simitis was PM and George Papandreou was foreign minister, and were abruptly cut off after the failed coup attempt against Recep Tayyip Erdogan in July, 2016.

Papandreou was able to commence the dialogue, after a long chill in relations following the 1996 Imia crisis that led the two countries to the brink of war, in a process that became known as «earthquake diplomacy» due to the Greece's...