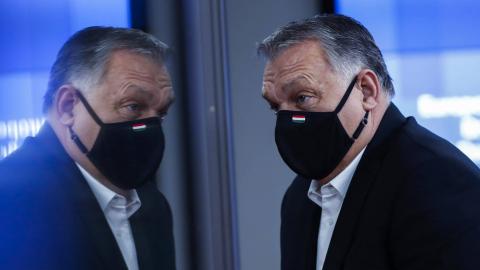 With Joe Biden set to replace Donald Trump in the White House in little over a week, Orban's most powerful political soulmate will be removed from the international chess board, taking with him the hope that a populist-rightist alliance could triumph globally over liberal forces.

It is not that Trump helped Orban in any significant way, other than inviting him once to the White House and phoning him as he was cooking dinner at home, but the symbolism of the US president being defeated by liberal forces is ominous for the Hungarian government.

A Biden White House and US State Department will certainly be less tolerant of Orban's anti-democratic tendencies and will closely scrutinise suspicious business practices, even though Hungary will surely not be the first on the list of problems for the incoming administration.

US President Donald J. Trump (R) and Hungarian Prime Minister Viktor Orban during their meeting in the Oval Office of the White House in Washington, DC, USA, 13 May 2019. EPA-EFE/Szilard Koszticsak European commitments questioned

Closer to home, clouds are gathering in the European skies. Although Orban tried to sell the compromise reached in December at the EU summit over the budget and recovery package as a grand victory, the rule-of-law conditionality - endorsed and strengthened by the European Parliament at the end of the year - will remain a thorn in the side of the government.

Hungary and Poland now have two months to turn to the Court of Justice of the European Union (CJEU) and appeal against this legislation, if they believe they have a case. Doing so would buy Warsaw and Budapest some time, but it would be difficult to win this war they are waging against the major EU institutions.