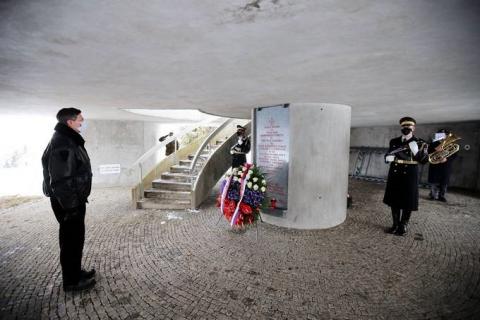 Dražgoše – President Borut Pahor honoured the 79th anniversary of a major World War II battle as he laid a wreath at the Dražgoše memorial in the north-west of the country on Sunday. Addressing the media, he was hopeful the nation would celebrate the 30th anniversary of Slovenia’s independence united.

The village of Dražgoše attracts several thousand people every year for the annual ceremony in memory of what is seen as one of the defining events of WWII on Slovenian soil, but this time the ceremony was held in a virtual form only due to the coronavirus epidemic.

“We hope we’ll understand the opportunity provided by the country’s 30th anniversary to unite us and let us put the differences between us aside for a moment to remember the reasons we’re together, as there’s much more that joins us than there’s what’s draws us apart,” Pahor said on the occasion.

He is hopeful that after Independence and Unity Day on 26 December brought a vaccine against Covid-19, it will be possible to celebrate the 30th anniversary of the declaration of independence massively on Statehood Day on 25 June.

Pahor would like it to be an occasion to remember the unity of the Slovenian nation and all those who at different times in history contributed to Slovenia’s independence, from the Rudolf Maister fighters credited with securing Slovenia’s northern border in 1918, to WWII Partisans and veterans who defended Slovenia’s independence in 1991.

Pahor also appealed for remembering the victims sacrificed for Slovenian independence since the idea of a united Slovenia first emerged and when generations fought to create the conditions to found an independent state, including victims during WWII.

Wreaths at the Dražgoše memorial were also laid by delegations of the WWII veteran association and the local community, with some individuals watching from afar.

In his address to the virtual ceremony, the association president Marijan Križman noted that the three-day battle between the Partisans and the 14-time stronger German forces claimed a high death toll, both among the defenders of Dražgoše and the locals, all of whom were executed by the Germans.

“The defenders lost the battle from the military point of view, but its moral implications were exceptional,” he said, adding that the occupying forces realised they were up against a brave, resilient army that was willing to defend the homeland at all cost.

Križman also offered criticism of the incumbent government for what described as negativism, cynicism, new divisions and hate speech, expressing expectation for a change this year.

The Dražgoše battle saw a 200-strong Cankarjev Battalion fight some 2,000 Nazi German troops in deep snow and freezing cold to prevent them from taking the village and deporting the locals.

Reaching the village, the Nazis killed twenty locals and another twenty in retaliation after the Partisans retreated, completely destroying the village and driving the survivors out.