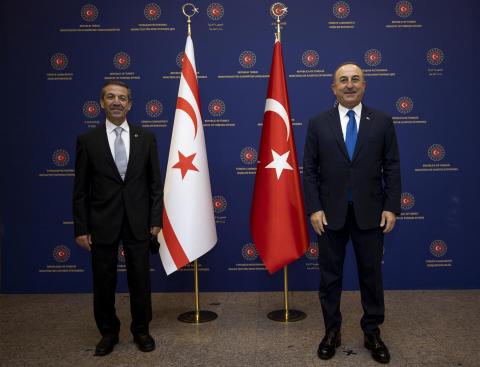 Turkey called on Greece to resume exploratory talks on their conflicting maritime claims in the Mediterranean Sea and other existing issues in January, Foreign Minister Mevlüt Çavuşoğlu said on Jan. 11.

"This is an invitation, I hope Greece won't refuse this opportunity, this invitation, and exploratory talks will begin soon," Çavuşoğlu said speaking alongside his Turkish Cypriot counterpart Tahsin Ertuğruloğlu.

"We are the host country, and our friends and delegations who will conduct these negotiations will determine its date together with their counterparts in Greece. But we are ready from today, and we are ready to discuss all issues as a self-confident country as always," Çavuşoğlu stated.

Greece had previously indicated that it could resume talks on Jan. 11, but that no move had been made, he said, adding that Athens had "no excuse" not to resume talks.

Çavuşoğlu stated that Albanian Prime Minister Edi Rama wanted to bring him together with Greek Foreign Minister Niko Dendias in Tirana, but Dendias went into quarantine during this period.

"I am ready to go to Tirana at the invitation of Rama for the meeting," he added.

Ankara and Athens, NATO members, vehemently disagree over the extent of their continental shelves in the Mediterranean and other maritime issues. They held 60 rounds of talks until 2016, when talks were suspended. Çavuşoğlu emphasized that more than 5,000 pages of documents emerged in these talks.

Tensions flared last year when Ankara sent a seismic exploration vessel to waters also claimed by Greece, but the vessel moved to Turkish shores in December.

Stating that no results have been obtained for 52 years regarding the solution of the Cyprus problem and the negotiations on the...