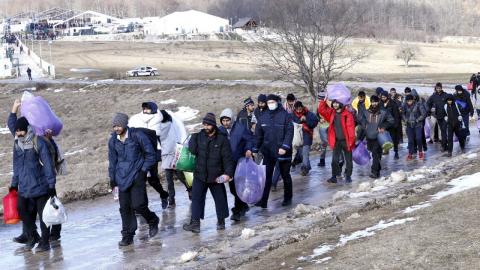 The rights groups said in a joint statement that around 2,500 people, including 900 residents of a now-closed camp in Lipa in north-west Bosnia, remain without basic shelter in perilously cold conditions as the authorities are failing to provide adequate accommodation.

"Accommodation is available to house most of the people currently sleeping rough in bitterly cold temperatures in Bosnia and Herzegovina. What is lacking is the political will to make that happen. The authorities at all levels must immediately provide suitable shelter and assistance to those in need," Eve Geddie, director of Amnesty International's European Institutions Office, said in the statement.

The statement said that the EU has provided over 88 million euros in assistance to Bosnia and Herzegovina to help it manage the migrant and refugee issue over the past three years, but the country has failed to identify suitable accommodation facilities, assume full responsibility for the management of existing facilities or provide minimum guaranteed support for people who have become stranded in the country.

Many of those at risk were housed at the temporary camp in Lipa, which was shut down on December 23. A fire broke out during the shutdown, making the area uninhabitable.

Over the weekend, the authorities installed dozens of heated tents, but close to 400 people remain in makeshift shelters despite heavy snow and temperatures that are expected to plummet in the coming days.