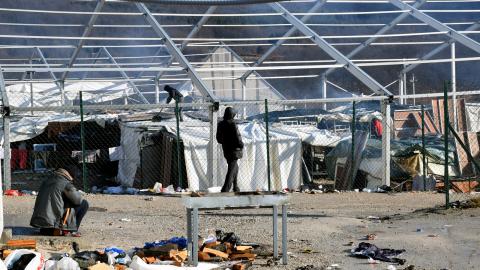 A cold wind carrying snow lifts the tarpaulin that has been tossed over a wobbly metal frame as an improvised tent.

Winter is only just under way in northwestern Bosnia; worse is yet to come.

This is the scene in the burnt-out remains of the Lipa refugee and migrant camp in a forest near the Bosnian town of Bihac and the country's border with European Union member Croatia.

Migrants are trying to repair an improvised shelter, Photo: BIRN

Fire tore through the camp late last year, leaving some 1,300 refugees and migrants with nowhere to go. The wind is biting; a pale sun and driving snow take turns.

In such conditions, life is not easy even between four walls. But for the few hundred still trying to live in Lipa, a solid roof is a luxury hard to imagine given the parlous state of Bosnian policy on how to handle the refugees and migrants crossing the country on the long road to Western Europe.

"We live in mud, in disaster, our lives are in danger and they told us when there was a pandemic that we would only be here temporarily," said Yusuf. "Look at what this looks like."

Lipa was in the process of closure when unidentified men began setting fire to the tents.

The International Organisation for Migration, IOM, which had supplied most of the services at the camp, had warned the camp would have to close given it was unsuitable for Bosnia's harsh winter weather. Bosnian authorities had promised to upgrade facilities at the site, but did nothing.