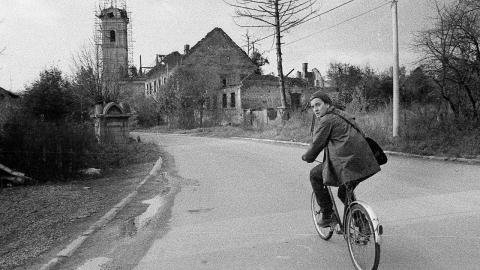 Many international photojournalists became famous for the pictures that they took during the wars in the Balkans in the 1990s - but unlike them, photographer and film-maker Chris Leslie arrived after the conflicts ended and has spent the years since then documenting the region in the post-war era.

Pictures taken during his visits are collected in a recently-published book entitled 'A Balkan Journey', which takes its readers on a photographic odyssey through 24 years of images from Leslie's archive, documenting everyday life in a post-war environment.

Leslie pointed out that in current affairs terms, the Balkan wars became "old news" as soon as they were over.

"That's the way it works. War is a story that sells and is dramatic and urgent. Peace is less so," he told BIRN in an interview. "And by the time of the September 11 attacks and the subsequent turmoil and wars in Afghanistan and Iraq, the Balkans slipped off the radar in terms of international news."

But documenting the peace is a different kind of job, one that takes more time if it is to be done properly, he suggested.

Leslie was born in 1974, and when the conflicts were raging in the Balkans in the first half of the 1990s, he was "too young to even contemplate going there", he said.

"If I was honest I couldn't even point to Croatia, Bosnia on a map. The wars in former Yugoslavia were happening in a distant, parallel universe," he admitted.

Then in 1995, he was studying in the US as part of his degree course and became great friends with some Croatian students.

"We were all in our early twenties. No-one...