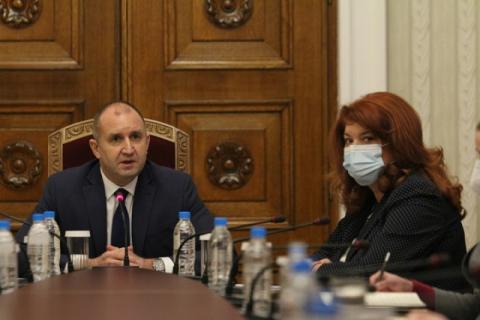 "The Central Electoral Commission is in a Zeitnot situation, the entire process of ensuring machine voting is progressing at risk - we have no contracts concluded, no clarity whatsoever," President Rumen Radev said as quoted by BGNES.

The Head of State uses the specific term of chess played for time that means a situation when the player has too little time to complete his moves. According to him, it is in such a situation that the electoral commission, increasingly pressed by time has to resolve the issue of machine voting enshrined in the law, but around which there is still too much ambiguity.

The Head of State recalled a meeting he had convened on the subject even before the one when, according to Rumen Radev, preparations for elections should have started back then.

"There is no decision of the Supreme Administrative Court with regard to the appeal, no contract has yet been signed, there are no clear-cut deadline for the delivery of the machines. There is also no established methodology for certification of these machines yet. There is no clear algorithm for how all political entities and public organizations will be able to participate in this certification process - software and hardware verification, storage control, transport and supervision of these machines", the Head of State reminded.

He also mentioned the need to train people handling machines, as well as the need for an information campaign for citizens.

According to Radev, the state is also slow in preparing a health protocol for the upcoming vote.

The presidential institution also insisted on considering amendments to the Electoral Code allowing smaller parties to participate on equal footing in election debates in public media, since in the context of the...