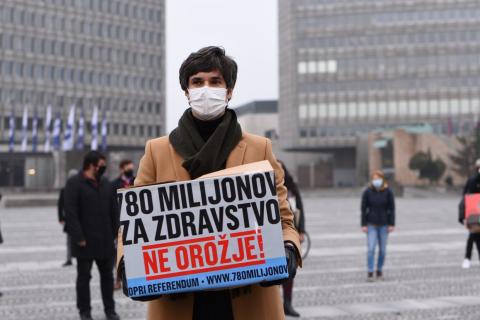 Ljubljana – The Constitutional Court has stayed the implementation of an act on EUR 780 million in investments in the Slovenian Armed Forces pending a decision on the constitutionality of the legislation. The Defence Ministry labelled the decision as “disproportionate”.

If it turned out the act is unconstitutional, the consequences of its implementation would be more severe than if it is stayed for a relatively short time until it has reached its decision, the court said on Monday.

It noted that investment funds for the Slovenian Armed Forces for this year and next were earmarked in the adopted national budgets already and can therefore be spent.

The temporary stay therefore affects only contracts that would create financial liabilities in the period beyond the current two-year budget, said the court, which adopted the decision in a 6:3 vote.

Before it was officially informed of the decision, the Defence Ministry said the court was taking on significant responsibility as it had put Slovenia in an “unenviable position” by deferring investments in the defence and security of the country, albeit only temporarily.

The stay will also have very concrete consequences by forcing them to suspend proceedings for the purchase of a transport air plane, which is already in the final phase. “Deferred supply processes could significantly defer the supply of specific military capabilities,” the ministry said.

The request for review was initiated by the four opposition parties which had launched referendum procedures after the National Assembly passed a bill earmarking EUR 780 million in additional defence spending between 2021 and 2026.

The referendum motion was thwarted by a parliamentary vote invoking the provision of the Constitution which bans referendums on issues concerning emergency measures to provide for the defence and security of the country.

They therefore petitioned the court to abrogate both the parliament’s decision on the inadmissibility of the referendum and the relevant act itself.

Left leader Luka Mesec, whose party spearheaded the referendum motion, told the press today that if the reported stay is true, it validates their warning that the referendum ban was “one of the most undemocratic acts in the history of Slovenia”. He believes it also serves as a serious warning to the “non-democrats in government”.