Quarantine word of the year 2020 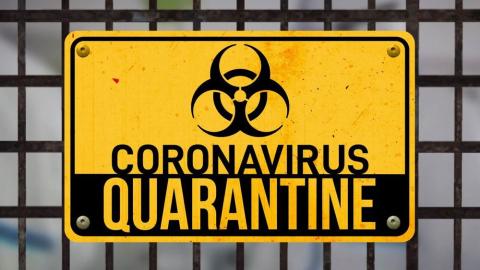 Ljubljana – The word of the year 2020 according to the Research Centre of the Slovenian Academy of Sciences and Arts (ZRC SAZU) is “quarantine”, followed by “cycling” in second and “14 days” in third place.

Apart from the 14-day period of isolation due to risky contacts which was later shortened to 10 days, quarantine was also used to refer to the lockdown in general.

Cycling was, however, a form of protest against the Janez Janša government during lockdown.

According to Katarina Keber from the Milko Kosec History Institute at the ZRC SAZU, quarantine was an archaic word which has become modern again. It is derived from an Italian phrase quaranta giorni, which means 40 days. This was the period of isolation, first introduced in 1377 in today’s Croatia’s Dubrovnik. Later it became known in other sea ports as well.

ZRC SAZU also declared the sign language gesture of the year, which is “coronavirus” or “Covid-19”. “Zoom” was in second place and “Beethoven” in third.

In the poem of the year category, there were two winners and 70 entries. Leto Prekleto (Damned Year) by Ranka Ivelja and Naša Vojna (Our War) by an anonymous author.

The poems were to contain all eleven words that were shortlisted for the world of the year among the 400 entries. The finalists were vaccine, quarantine, cycling, bubble, positive, ventilator, easing, schoolsick, zoom, 14 days and non-year.

The voting took place between 4 January until noon today, when the word of the year was declared. It receive little more than 1,000 of the 5,060 votes cast. Last year, 2,139 people voted, selecting “climate”.

The post Quarantine word of the year 2020 appeared first on Slovenia Times.