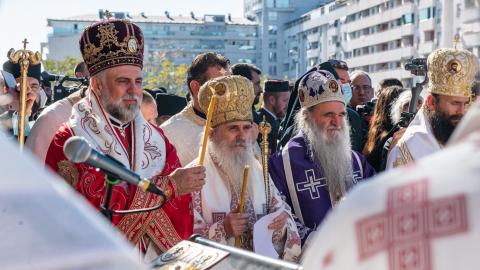 On January 7, when Orthodox Christians mark Christmas, a Serbian Orthodox bishop in Germany gave an interview to Balkan news outlet NewsMax Adria. His remarks, however, were more political than religious.

Bishop Grigorije, the 52 year-old head of the Serbian Orthodox diocese of Dusseldorf and all Germany, has waded into politics before, criticising the way Serbia is being run by President Aleksandar Vucic and his Progressive Party.

But in the Christmas interview he went a step further, announcing a "plan" that set tongues wagging back home.

"My plan is to gather as many young people as possible, who are educated, honest, smart and brave and who want to come to Serbia, if they're not already there, and, if they are, to sacrifice themselves, to build above all a legal system," the bishop said.

"There is no man who can be saviour," he said, in apparent reference to Vucic. "It is necessary to create a system so we're not looking for a saviour every time."

A modern, moderate figure within the Serbian Orthodox Church hierarchy, Grigorije has largely avoided being pigeon-holed as 'pro-European' or 'nationalist', the traditional ideological divide in Serbia. Though he has previously dismissed the idea of being a political leader, many in Serbia's beleaguered opposition see him as potentially just that, a saviour of their election hopes in 2022.

The funeral of head of SPC in Montenegro Amfilohije in November 2020. Grigorije in red church mantle. Photo: Milos Vujovic

Criticism of the bishop by pro-government tabloids and government officials, including Prime Minister Ana Brnabic, suggest the Progressives are unnerved, possibly fearing a repeat of what went on last year in neighbouring Montenegro when a damaging...