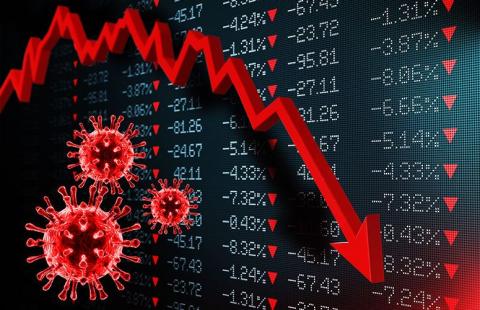 Ljubljana – The central bank says in its latest publication that Slovenia had one of the worst epidemiological situations in the eurozone in the last quarter of 2020. This demanded strict restrictive measures in the long-term that in turn caused another steep decline in economic activity.

“As opposed to the first wave, when industry also recorded a steep drop, it was services that were strongly affected at the end of last year,” Banka Slovenije says in the latest issue of Economic and Financial Trends.

Domestic private consumption dropped further, and the activities dependent on foreign guests experienced an even greater decline. On the other hand, the shock was not as strong in construction and industry due to more favourable conditions.

The central bank notes that, while remaining it has been better than in the eurozone on average, the situation on the Slovenian labour market is deteriorating due to the new Covid-19 epidemic wave.

The number of registered unemployed persons has been persistently increasing since mid-November and is approaching that at the peak of the first wave in the spring.

What mitigates the situation are support measures, including subsidised furlough, and despite the crisis shock, there are much more job vacancies than in the spring, and companies are more optimistic about hiring than in the eurozone on average.

Apart from tourism, the beginning of the second wave has not had a negative impact on the Slovenian export sector, as last October the total exports lagged behind the figure from October 2019 only by 2.6%. First estimates for November are also encouraging.

Banka Slovenije added that, like in the first wave, deflation in Slovenia increased as restrictive measures were re-introduced in the last quarter. Core inflation last December was at 0.1%.

As the renewed increase in unemployment, high uncertainty among consumers, lower income and new shock in private consumption weakened the domestic inflation indicators at the end of the year, “core inflation is expected to remain low for a while also after the measures are relaxed.”

It is obvious that the epidemic has strongly affected operation of companies and private consumption, the central bank says, adding that the consequences were reflected even more in a high, 12.9% increase in public spending.

Budget deficit is expected to remain high also in 2021 as many support measures remain in force, although their scope will be smaller than in 2020 as it is expected that the epidemic will slow down.

The general government debt at the end of last September stood at 78.5% of GDP, and for the end of last year it has been estimated at above 80%. It will be reduced gradually this year, and is expected to stay well below the eurozone average.

Ban on overtaking for lorries on A1 motorway enters into force

Government approves release of funds for the STA