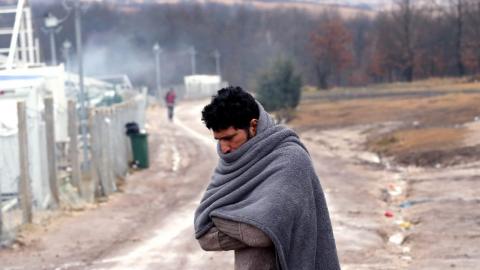 Human and minority rights, the rule of law and media freedom remain endangered in several Southeast and Central European countries in 2020, especially in the circumstances of the COVID-19 pandemic, Human Rights Watch, HRW, said in its latest report published on Wednesday.

The report looks at over 60 countries, among them Bosnia and Herzegovina, Kosovo, Serbia, Hungary and Poland.

In Bosnia, HRW noted, serious human rights concerns remained in 2020 "over ethnic divisions, discrimination, and the rights of minorities and asylum seekers".

On migrants, an ongoing problem in the country, HWR noted around 3,500 refugees and migrants living in the northwestern Una-Sana Canton outside official centres, many sleeping rough.

"A growing concern is the number of unaccompanied or separated children among them, left without access to adequate accommodation and child protection services," the report added.

In Kosovo, the report said discrimination was still a problem for minority communities like the Roma, Ashkali and Egyptian communities.

"A comprehensive survey of Roma, Ashkali, and Balkan Egyptians in Kosovo, published by the Organization for Security and Cooperation in January, concluded that the majority of members of these communities face high unemployment, poor housing, and experience discrimination, particularly women," the report recalled.

However, HRW noted more positively that indictments issued against former Kosovo president Hashim Thaci and other high officials for war crimes in the 1990s "marked long-awaited progress towards justice for grave violations of international human rights and humanitarian law, as well as the laws of war".

Looking at accountability for war crimes in Serbia, HRW noted the case of...