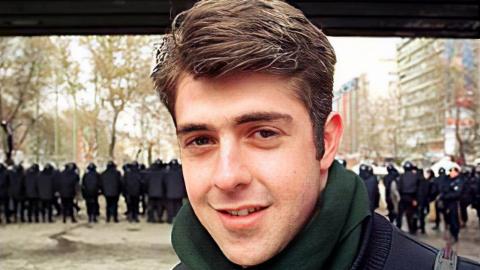 It was midday on March 29, 2001 when the Associated Press news agency team in Kosovo's capital Pristina received information that gunshots had been heard near the border with North Macedonia.

Kerem Lawton, a 30-year-old British producer for AP Television News, and Sylejman Kllokoqi, a camera operator for the agency, decided to head for Krivenik, a village three kilometres away from the border on the Kosovo side.

"When we arrived in Krivenik, we saw some US troop vehicles leaving the place. Local residents told us that an hour earlier, a mortar hit the centre of the village," Kllokoqi told BIRN.

The incident happened amid an armed conflict between North Macedonian government troops and ethnic Albanian rebels of the National Liberation Army guerrilla force, which erupted in January and would continue for several months before a peace deal was signed later in 2001.

"Kerem was parking while I started to walk to the place hit by a mortar," Kllokoqi continued. "Suddenly I heard a huge explosion hit the car and I saw a plume of smoke."

A barrage of mortar shells had been fired at the village. Kllokoqi, who was uninjured, immediately started calling out for his colleague.

"I started shouting 'Kerem! Kerem!' Then I saw him in the car covered in blood. He was unconscious. I took him in my arms, asking for help, for a car to send him to the hospital," he recalled.

"A US peacekeepers' patrol gave Kerem first aid. He was then taken by road, first to a local clinic and then to Camp Bondsteel, the US military base in Kosovo, but he died before arrival with multiple wounds," Kllokoqi explained.

More than two decades later, confusion remains about who fired the shells. Neither side has admitted responsibility, and...