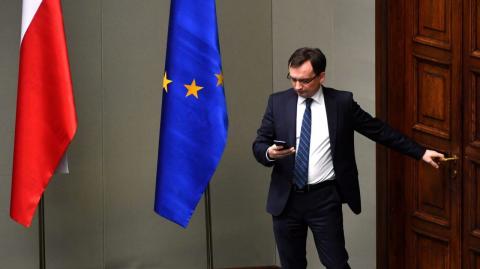 High-level Polish officials have jumped on the bandwagon of criticism over US President Donald Trump's social media bans to promote a recent draft law officially aimed at combatting online "censorship", but which digital rights groups warn must be scrutinised carefully.

"The censorship of freedom of speech, the domain of totalitarian and authoritarian regimes, is returning today in the form of a new, commercial mechanism fighting against those who think differently," Polish Prime Minister Mateusz Morawiecki wrote in a Facebook post on January 12.

Speaking to the daily Rzeczpospolita on the same day, Sebastian Kaleta, a secretary of state at the Ministry of Justice, said that the blocking of Trump's social media accounts had "an effect which could even be called censorship".

The comments come after the biggest global social media platforms removed or suspended the accounts of Trump as a consequence of his using those platforms to mobilise supporters to challenge the legitimate result of the presidential election and march on the Capitol on January 6, which ended with five fatalities. The restrictions have caused controversy around the world, with German Chancellor Angela Merkel describing Trump's ban from Twitter as "problematic".

But even before the events at the US Capitol, Polish Justice Minister Zbigniew Ziobro announced on December 17 that the government was preparing a draft law on the protection of freedom of speech online, arguing that, "It's not uncommon that representatives of various groups operating in Poland fall victim to ideological censorship when seeing their content removed or blocked from the internet." The proposal came after some social media companies, such as Facebook, took action to restrict the online activity of...