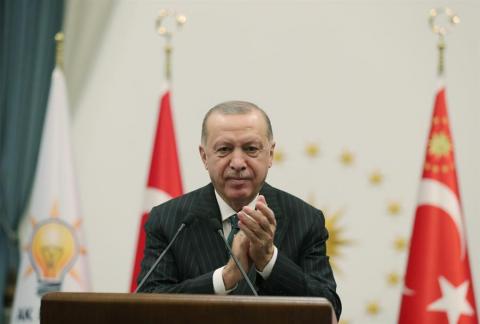 President Recep Tayyip Erdoğan on Jan. 13 urged his ruling Justice and Development Party (AKP) members to work hard as if "every day is an election day" until 2023 when the country is scheduled to run for presidential and parliamentary elections.

"My biggest expectation is for you to see each day as an election day and work until 2023," he said, addressing the provincial congresses of the AKP in the provinces of Kırşehir, Kırıkkale, Yozgat, and Sivas via video link.

"It means that those who do not work day and night to win the hearts of the nation aspire to the wrong duty in the wrong place," he stated.

The AKP will be victorious in the 2023 elections, "as it did" in every other election in the past 20 years, the president said.

"Hopefully, we will be represented in parliament with an overwhelming majority in the 2023 elections and we will win the presidential election again. As the People's Alliance, both as the AK Party, as the MHP, and as the BBP, the People's Alliance is getting stronger and marching to the future," Erdoğan said.

Turkey will go to presidential and parliamentary polls in June 2023, both Erdoğan and his ally, Devlet Bahçeli, leader of the Nationalist Movement Party (MHP), said many times despite the opposition parties' suggestion that the government will call snap elections before 2023.

Expressing pride in the increasing number of members of the AKP, Erdoğan said in 2020 alone, the party increased its membership by one million despite the difficult circumstances due to the pandemic. He said this proves that people are putting their trust in the AKP.

His party is the one with the highest capacity to rejuvenate itself, the president added.

Calling on the AKP...