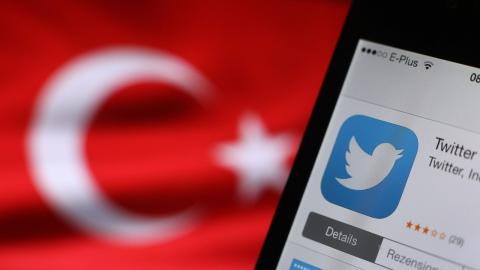 The Twitter logo seen on a smartphone held beside a Turkish flag. Photo: EPA/Karl-Josef Hildenbrand

Turkey had the highest number of combined requests including court orders and other legal demands, with 45,776 requests. It was followed by Japan and Russia, which made 45,776 and 30,436 requests respectively.

Turkey also at the top of the list when it comes to the number of court orders it sent to Twitter. It sent 6,513 such requests in the first half of 2020. Russia followed far behind with 2,972.

In other legal demands categories, meaning non-court order requests, Turkey again topped the list with 39,263 requests made in the first half of 2020, followed by Japan, which made 38,814 requests, followed in third place by Russia, which submitted 27,464 such requests.

Turkey also sent 347 information requests to Twitter, which did not comply any of them.

Turkey remains in number one place for the total number of accounts specified for closure/action under court orders and other legal demands. It specified 99,840 accounts for closure or other actions, followed by Indonesia, which sought action on 74,660 accounts. Japan came third, with 47,472 accounts.

In terms of accounts withheld by Twitter, Turkey again had the highest number globally with 2,501 withheld accounts, followed by Russia with 340 and India with 238.

According to the Twitter report, 58 accounts of verified journalists and news outlets from around the world were subject to 333 legal demands in the period in consideration. Most of these legal...

European Taekwondo Championship 2021 to Be Held in Sofia