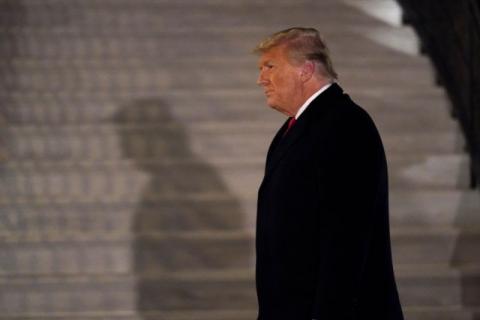 The resolution calls on Vice President Mike Pence to initiate the procedure envisaged by the 25th Amendment of the American Constitution, so that President Donald Trump would be relieved of his duties, the agencies report. The resolution was adopted by 223 votes to 205.
The removal of the president under the 25th amendment implies that the vice president and the majority of the members of the president's cabinet declare that the president is not capable of executing his constitutional duty.
Vice President Mike Pence now has 24 hours to state whether he is ready to act according to the adopted resolution.
However, before the vote, he told the Speaker of the House of Representatives, Nancy Pelosi, to oppose the launch of the 25th Amendment.
Pence sent a letter to House Speaker Nancy Pelosi earlier Tuesday saying he will not use the provisions of the 25th Amendment to depose Trump.
"I do not believe that such a course of action is in the best interest of our nation or consistent with our Constitution," he wrote. "I will not now yield to efforts in the House of Representatives to play political games at a time so serious in the life of our nation", Pence stated in a letter sent by his cabinet to the House Speaker Pelosi.
The vice president of the USA said that the energy of the current administration is aimed at ensuring an orderly transfer of power, and he appealed to Pelosi and other members of Congress to avoid moves that would "further divide the citizens and inflame passions."
"I urge you and every member of Congress to avoid actions that would further divide and inflame passions of the moment," Pence added.
The resolution of the House of Representatives contains, among other things, an article accusing Trump of...