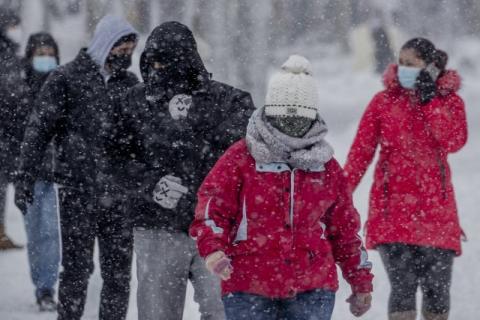 The Philomena storm, which left Madrid paralyzed by snow last week, is sweeping across the Mediterranean, has already covered the eastern parts of the Balkans and continues via Serbia towards Greece and Turkey.
Due to Philomena, Madrid faced with the heaviest snowfall in decades, while the temperature dropped to a record -36 degrees.
It was the first snow in Madrid in the last 10 years, and the Spain's capital was buried in 50 cm of snow.
The capital of Spain has not experienced so much snow in the last 50 years. At the same time, the monthly amount of rain fell in Gibraltar in just two days.
Meteorologist and columnist of the Croatian portal Index.hr, Dunja Maz, says that in recent years, the rule has been established that hurricanes should be renamed even when they come to Europe as extratropical cyclones, and the countries that are the first to be hit by them give them names.
"But, whether we call that cyclone Philomena or not, the fact is that it is the same system, although in the meantime, passing through the Mediterranean, it has undergone several changes. It has now reached the Ionian and Aegean Seas and continues further east, primarily to Turkey, but also to a part of Greece, it will bring unusual precipitation," says Dunja Maz.
According to her, the anticyclone, which extends from the western part of southern Europe and slowly spreads northwards, will draw polar air as far as the Balkans in the coming days, which is why we will see very low temperatures for the next week.
She adds that these are relatively unusual situations for this part of the world, but reminds that in the last winters there were already strong storms that brought unprecedented snows to the southern parts of Europe, and even to the north of...