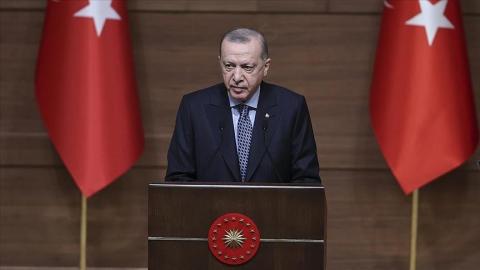 Turkey will not bow down to "pressure" by social media companies that see themselves above the laws on individual rights, the country's president asserted on Jan. 14.
President Recep Tayyip Erdoğan's remarks came at a media awards ceremony held in the presidential complex in the capital Ankara.
Digitalization across the world has brought some radical changes and technology is at the epicenter of human life, enabling people to obtain information at a real-time basis, Erdogan said, adding digitalization triggered some challenges and risks, though.
Some of these challenges emanating from new media instruments are cyberbullying, cyberterrorism and false news, and disinformation also peaked recently on social media, the president said.
"We surely cannot tolerate violent events targeting democracy and democratic institutions; however, we cannot also accept the closure of people's communication channels without any legal basis," he said, stressing that the U.S. elections demonstrated how far the "digital fascism" could go.
He accused social media companies of not complying with court rulings in Turkey against accounts found to support terrorism.
"We can't allow terrorism, its propaganda to gain ground in the virtual world just as we don't allow terrorism within our borders," he said.
Erdoğan added that recent developments across the world demonstrated the importance of Turkey's legal fight against "digital dictatorship and cyberbullying."
The leader also addressed the long-running sit-in protest of families in Diyarbakir, southeastern Turkey, against the YPG/PKK terror group.
He welcomed the efforts of the Radio&TV Journalists Association to be the voice of the families protesting against the terror group which killed thousands of...