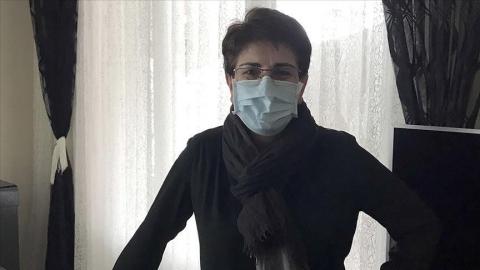 Turkish citizen Safiya Kocaağa was honored by French authorities on Jan. 13 with the National Order of Merit for her efforts at a hospital during the early stages of the spread of the novel coronavirus in France.

Working as cleaning staff at a French hospital, Kocaağa, 51, volunteered to sew protective clothing for doctors and patients at her hospital at a time when the hospital suffered from a shortage of protective equipment.

Speaking to Anadolu Agency, Kocaağa said she emigrated from Turkey to France in the 1980s and settled in the town of Guéret.

She said that with the start of the spread of the coronavirus in France, in March 2020, she noticed a serious shortage of protective clothing for doctors and patients, which prompted her to sew them herself to help fill this gap.

Kocaağa went on to say that she set up her sewing machine at the hospital to continue working there seven days a week so that with the help of a colleague, she was able to sew 800 protective garments in one month.

First in Creuse to receive National Order of Merit

Explaining how she learned she was awarded, Kocaağa said she was surprised one day when the hospital director called her to tell her that she would be awarded the Order of Merit, as the local press widely echoed her sacrifices.

She stressed that she was the first to receive the National Order of Merit in the French department of Creuse.

Kocaağa said she had received congratulatory calls from the Turkish consulate in Lyon, her family in Turkey and French parliamentarians.

Asked whether she got in contact with Turkey's President Recep Tayyip Erdoğan, Kocaağa...