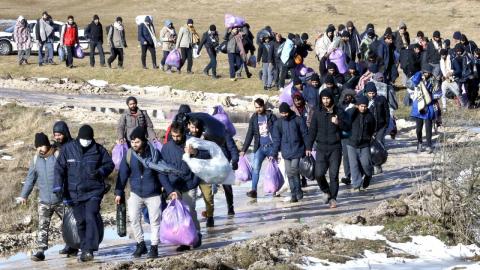 A minister in a Bosnian canton bordering Croatia said the EU member state had forcibly returned over 7,000 migrants and refugees to Bosnia last year, asking why his own country had not done the same to its neighbours.

"Based on the statements of migrants, we have about 7,210 migrants who have been returned from the territory of Croatia," Nermin Kljajic, Interior Minister of the Una-Sana Canton, told a Security Committee session of the Federation of Bosnia and Herzegovina, the larger of the two Bosnian entities.

He asked why Bosnia had not in turn returned any migrants to Serbia or Montenegro, from where many of them had entered Bosnia on their way to the European Union.

The largest number of illegal migrants are thought to reach Bosnia across the porous eastern borders with Serbia and Montenegro.

There are currently about 9,000 refugees, migrants and asylum seekers in Bosnia and most are concentrated in four migrant centres in the northwest of the country near Croatia in Una-Sana Canton.

Croatian police have been accused of systematically violating the human rights of migrants on the Bosnian border. Media reports describe the politics of pushbacks and anti-migrant violence as routine.

Croatian authorities deny such practices. Davor Bozinovic, Minister of Police, on several occasions, most recently in October, said the police were not doing anything illegal.

However, dozens of migrants returned to Bosnia from Croatia, and even Slovenia, have told BIRN that the Croatian police used violence on them.

"They caught us when we tried to enter Croatia. They took our phones and money. They also took my shoes. They hit me on the back with batons," Saddam Hussain Ghuman, a Pakistani migrant, told BIRN in August last...