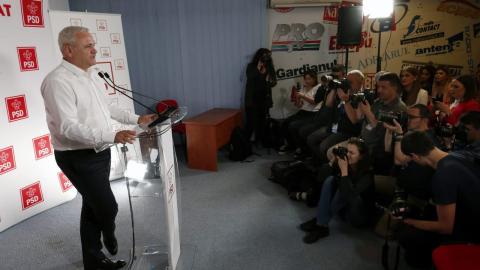 Romania's anti-corruption prosecutors on Thursday opened criminal proceedings against former strongman Liviu Dragnea, who is suspected of influence peddling to secure his presence at Donald's Trump's inauguration as US President on January 20, 2017.

A statement by Romania's National Directorate against Corruption, DNA, said Dragnea used his influence over the government of the time to favour his co-accused in the case, businessman Gheorghe Dimitrescu.

In exchange, Dimitrescu gained him access to Trump's inauguration ceremony through a US politician and businessman who was vice-president of the Presidential Inauguration Committee. The arrangement allegedly cost 250,000 US dollars.

At the time, Dragnea was the leader of the Social Democratic Party, PSD, which just had won the December 2016 legislative elections with 45 per cent of the vote, and was leading a government presided over by PSD member Sorin Grindeanu.

Dragnea, who is now serving a three-and-a-half-year jail sentence for corruption, was widely considered the de facto prime minister at the time, a position he was disqualified from holding due to a previous conviction.

Dragnea "trafficked the real influence he had over the prime minister and other members of the governmentin favour of the Romanian businessman suspected in the cause," the DNA statement reads.

Dragnea's intervention would have granted Dimitrescu preferential treatment for his businesses, particularly in the field of defence and intelligence, prosecutors added.

According to the DNA, later in 2017, Dragnea also used his influence over the government to get Dimitrescu to pay 100,000 US dollars that were then used to fund lobby services from a US firm that secured Dragnea meetings with high-ranking...