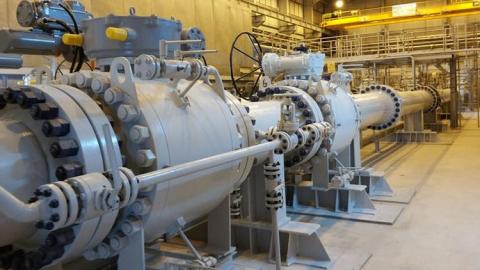 The Trans-Anatolian Natural Gas Pipeline (TANAP) has reached a plateau of its 16 billion cubic meters (bcm) annual capacity, the CEO of the company running the pipeline said on Jan. 14.

"We can increase the capacity gradually to 31 bcm per year with additional compressor investments. Some six years ago, we had planned to raise the capacity to 24 bcm steadily. But, for such an increase, there needs to be an adequate volume of natural gas and demand for it to be sold," TANAP CEO Saltuk Düzyol told a group of journalists in a video conference.

Natural gas and oil prices fell significantly as demand plunged globally amid the coronavirus pandemic, he said. "There isn't a good climate for upstream or downstream investments. We can think of extensions once demand recovers."

Commercial gas flow through TANAP, the 1,850-kilometer pipeline, started on June 30, 2018. In its first operation year, more than 2 bcm of natural gas was carried to Turkey. With a gradual increase in capacity since then, the total of Azerbaijani gas delivered to Turkey's national company Botaş reached 8.4 bcm as of Dec. 31, 2020.

Düzyol said that the annual volume of natural gas delivered to Turkey would stay stable at 6 bcm per year until a new increase in capacity.

The Trans Adriatic Pipeline (TAP), TANAP and the South Caucasus Pipeline are sections of the 3,500-kilometer Southern Gas Corridor (SGC) built to carry natural gas from the Shah Deniz field in the Caspian Sea to Italy through Azerbaijan, Georgia, Turkey, Greece and Albania.

Commercial natural gas supplies to TAP via TANAP started on Jan. 1. "For the first time in...