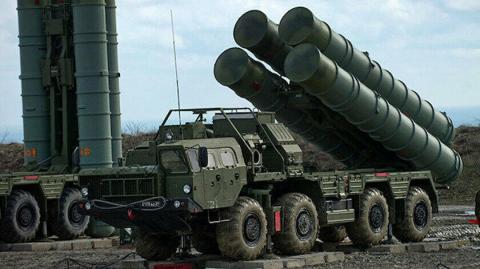 President Recep Tayyip Erdoğan pledged to continue talks with Moscow for the procurement of the second batch of the Russian-made S-400 air defense systems and said they would discuss details at the end of the month.

He stressed that Turkey is determined to proceed with the S-400 deal despite U.S. opposition.

"No country can determine the steps we will take towards our defense industry. This is entirely up to us. We had handled the first package for the S-400 with Russia, and now [talks] for the second package continue based on our previous negotiation," Erdoğan told reporters on Jan. 15 after Friday prayers.

Turkey will have meetings with Russia at the end of the month, Ankara and Moscow will discuss many issues including the defense industry, Erdoğan said.

"We don't know what the incoming [John] Biden administration would say, but we're not in a position to ask for permission," he added.

Recalling that Turkey is a NATO member, the Turkish government would not accept any fellow members to "guide" Turkey, Erdoğan added.

The president has criticized the United States for kicking Turkey out of the F-35 fighter jet program after Ankara purchased the Russian missile defense system, a move that also triggered U.S. sanctions.

Turkey paid "very serious money'' for the F-35 stealth jets, he said and added, "This is a very serious mistake that America, as an allied country, has done to us."

"I hope with Mr. Biden assuming office and with discussions, he will take more positive steps and we can straighten this out,'' he added.

Turkey was removed from the F-35 program even though it produced some parts for the jets. The U.S. said the Russian system could jeopardize the safety of...