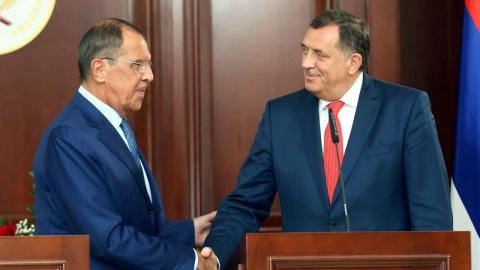 Ukraine has dismissed an offer by Bosnian Serb leader Milorad Dodik to return a disputed icon to Ukraine if it can first prove that it sought the icon, before Dodik gave it to Russian Foreign Minister Sergei Lavrov in December.

"Ukraine does not accept the language of the ultimatum on the return of the icon from Bosnia and Herzegovina," Oleg Nikolenko, from the Ukrainian Foreign Ministry, told RFE on Thursday.

According to him, Ukraine's rights to the ancient icon to Ukraine are an indisputable fact, and the Prosecutor's Office of Ukraine has already initiated criminal proceedings in connection with its allegedly illegal export.

"We expect the Bosnian side not use the icon in domestic political struggles but to provide assistance to the criminal investigation and expertise and to its return to Ukraine," Nikolenko said.

He stressed that Ukraine and Bosnia are both signatories to the Convention on Measures against the Smuggling of Cultural Property.

Dodik presented the 300-year-old gilded icon to Russian diplomatic chief Lavrov during a two-day visit to Bosnia on December 14.

Afterwards, the Ukraine embassy in Bosnia sent a note to the Bosnian Foreign Ministry seeking "detailed information on the origin of this item".

On December 23, Russia returned the icon to the Bosnian embassy in Moscow. A few days later, the Bosnian ambassador to Russia brought the icon to Bosnia and handed it back to Dodik.

The Prosecutor's Office of Bosnia opened a case on December 18.

Ukraine claims that the icon is part of its cultural heritage and originates from Lugansk in eastern Ukraine, part of a region held by Russian-backed separatists.

Lugansk is currently the capital and administrative centre of the Lugansk...