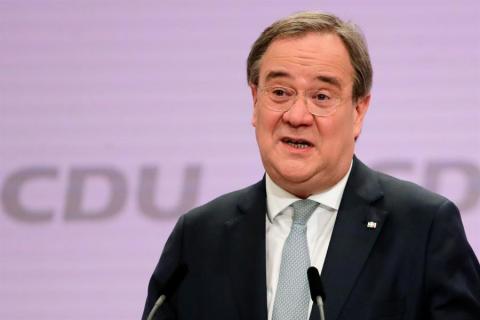 Chancellor Angela Merkel's center-right party has elected Armin Laschet, the pragmatic governor of Germany's most populous state, as its new leader- sending a signal of continuity months before an election in which voters will decide who becomes the new chancellor.

Laschet defeated Friedrich Merz, a conservative and one-time Merkel rival, at an online convention Saturday of the Christian Democratic Union. Laschet won 521 votes to Merz's 466; a third candidate, prominent lawmaker Norbert Roettgen, was eliminated in a first round of voting.

Saturday's vote isn't the final word on who will run as the center-right candidate for chancellor in Germany's Sept. 26 election, but Laschet will either run for chancellor or will have a big say in who does.
Merz, 65, is a one-time rival of Merkel who stands for a more conservative course but lacks government experience. He is making his second attempt to win the party leadership after a decade away from front-line politics, following his narrow loss in 2018 to outgoing leader Annegret Kramp-Karrenbauer.

Merz told delegates that, when he joined the CDU at 16, "I didn't go into a placement agency for government jobs; I went into a party that has principles, that fought passionately for its politics ... always carried by the idea that there are no left-wing majorities in this country."

Laschet, 59, is the governor of Germany's most populous state, North Rhine-Westphalia- a traditional center-left stronghold where he won election in 2017. He is viewed as more in line with Merkel's pragmatic centrism, and pointed Saturday to the value of continuity and moderation.

"We must speak clearly but not polarize," he told delegates. "We must be able to integrate, hold society together."
Laschet...