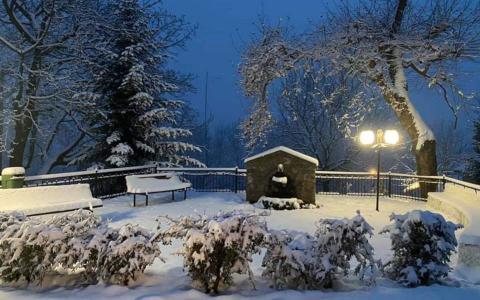 A cold front dubbed Leandros is hitting Greece with snow on Saturday, with power outages reported in the eastern part of Thessaloniki.

Regions as far south as Crete are expecting an onslaught heavy rain and strong winds that will last through Tuesday.

In higher elevations of Attica, central Greece, and the Peloponnese several roads call for snow chains on vehicles, while in Attica police has preventatively banned cars from sections of Tatoiou Street, on the way to Katsimidi, and big trucks from sections of the Athens-Lamia highway.

On Mount Hymettus, Anapafseos Street in the district of Papagou leading to the mountain and the ring road of Alimos-Katehaki near Kessariani have also been shut to traffic.

In Penteli-Nea Makris ring road, traffic is banned from the 414 Military Hospital and further up. Restrictions are also in place on sections of Dionyssou,...