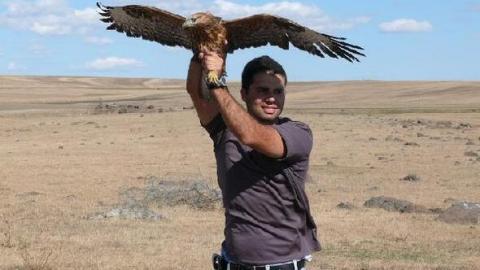 Utah University faculty member and professional nature photographer Turkish Professor Çağan Şekercioğlu has become the person who saw the most bird species in the world in 2020.

Out of 9,590 bird species, which were observed all over the world in 2020, Şekercioğlu entered the observation record of 1,849 species on the world bird-watching site eBird. Şekercioğlu observed the birds during his visits to Turkey, U.S., India, Colombia, Tanzania and Britain.

Also a professional nature photographer at National Geographic and Getty, Şekercioğlu documented most of these bird species with photographs.

In the general ranking for all years, Şekercioğlu ranked fifth in the world with a total of 8,133 bird species he recorded in eBird.

Explaining that people who stayed in their homes due to the COVID-19 pandemic, Şekercioğlu said that their interest in nature and birdwatching increased in 2020.

Noting that the most interesting species in the world are birds, Şekercioğlu said, "Therefore, birds are the best protected group in general. Despite this, 14 percent of the world's bird species are endangered. Nine percent are about to be endangered. These rates are much higher in the other living groups. A five-year study with our doctoral student, we published the first scientific analysis of all eBird data in the world in 2020."

He asked the observers to record not only bird species but also all other information, saying, "It is critical that observations are made not only at hotspots where species are abundant, but also at many different points. Bird watchers should observe birds wherever they go. Entering data from places, where no or little data has been entered before, will help both explore new places and protect...

One of Europe's Most Wanted Jihadists was Arrested