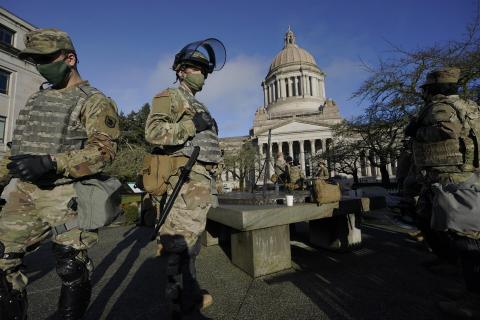 By the busload and planeload, National Guard troops were pouring into the nation's capital on Jan. 16, as governors answered the urgent pleas of U.S. defense officials for more troops to help safeguard Washington even as they keep anxious eyes on possible violent protests in their own states.

Military leaders spent chunks of Thursday evening and Friday calling states in an unprecedented appeal for more National Guard troops to help lock down much of the city in the days before President-elect Joe Biden's inauguration. In dribs and drabs, governors responded, some agreeing to send an extra dozen, 100 or even 1,000, while others said no.

The calls reflect fears that violent extremist groups are targeting the city in the wake of the deadly insurrection at the U.S. Capitol on Jan. 6. The threats range from armed insurgents to possible attempts to plant explosive devices at so-called soft targets. But as Washington begins to resemble an armed camp, with more than 25,000 Guard due in the city by early next week, concerns about violence at state capitals has grown.

Oregon Gov. Kate Brown said she turned down the federal request to send at least 100 more National Guard troops to D.C. "I didn't think that we could safely fill that commitment," Brown said. Oregon has already agreed to send 30 to Washington, but state leaders are worried about violence at the state capitol in Salem.

Others agreed, setting off a dizzying torrent of military flights and convoys into the region.

"The peaceful transfer of power is a central tenet of American democracy, and Connecticut stands ready to aid in the protection of our country." said Connecticut Gov. Ned Lamont, who had initially approved sending 100 Guard and on Friday agreed to send 200 more.