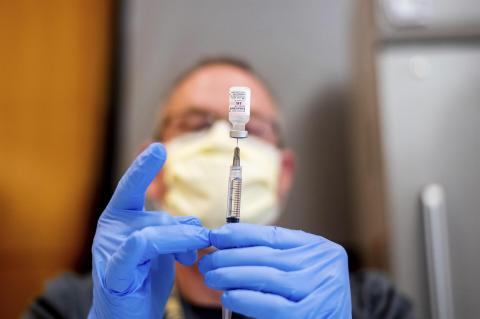 Pharma giant Pfizer tried to ease concerns in Europe about deliveries of its coronavirus vaccine as nations across the world doubled down on restrictions to fight the rampaging pandemic.

The coronavirus pandemic is showing no signs of slowing down, with infections surging past 94 million and more than two million deaths, and Europe among the hardest-hit parts of the world.

Worries have grown that delays in the delivery of Pfizer-BioNTech shots could hamper a European vaccine rollout which has already faced heavy criticism across the continent.

Work is ongoing at the Pfizer plant in Belgium to increase capacity, and the firm and its German partner BioNTech said on Jan. 16 it would allow them to "significantly" scale up vaccine production in the second quarter.

Deliveries would be back to the original schedule to the EU from January 25, they pledged.

Several Nordic and Baltic countries have described the situation as "unacceptable", while Belgium's vaccination strategy task force condemned a lack of consultation by Pfizer over the deliveries as "incomprehensible".

France, which crossed 70,000 COVID-19 deaths on the weekend, is set to begin a campaign to inoculate people over 75 from Jan. 18. Russia plans to begin mass vaccinations the same day.

Despite the rollout of vaccines, countries still have few options but to rely on movement and distancing restrictions to control the spread of the virus.

Curbs will be tightened in Italy and Switzerland from Jan. 18, while Britain will require testing of all international arrivals.

The number of infections in the United States - the worst-hit country - soared to more than 23.7 million on Jan. 16, with close to 400,000 deaths, according to a Johns Hopkins...

Scientist urges girls to ‘never give up’