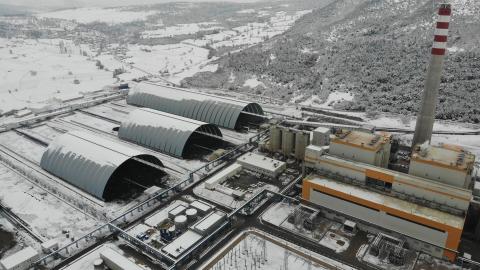 President Recep Tayyip Erdoğan said on Jan. 16 that Turkey is among the top four nations globally in geothermal energy and stressed the importance of renewable energy investments.

He spoke at Sanko Energy Salihli GPP-2 and GPP-3 power plants via video conference and thanked the Sanko Group.

With the JES-2 and JES-3 power plants, which have a total installed capacity of 54.5 megawatts and annual electricity energy of 500 million kilowatt-hours, the energy needs of 200,000 households will be met, according to a statement.

As a renewable energy source, thanks to the JES-2 and JES-3 geothermal power plants, 280,000 tons of CO2 emission will be prevented, it added.

Sanko Energy carried out a project with the Salihli municipality to heat 8,600 homes with geothermal resources and planted 12,000 trees in and around the power plant.

'We prepare a bright future for Turkey'

Earlier in the day, Erdoğan attended the opening ceremony of multiple energy and natural resources facilities in western Manisa province via video link.

"Despite those who would like to see Turkey stumble, drag on the crisis and chaos, we are preparing a bright future," he said on Twitter.

Meanwhile, Foreign Minister Mevlüt Çavuşoğlu said on Twitter that "Turkey is among 5 countries in the world with1GW installed geothermal capacity. 4th in the world, 1st in Europe. Our capacity increased despite Covid 19. We added 84,5 MW with 3 more geothermal plants inaugurated today by President @RTErdoğan."