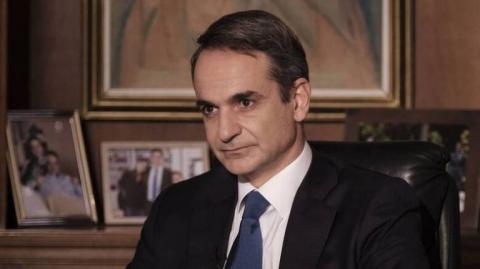 Prime Minister Kyriakos Mitsotakis in an address to his New Democracy MPs stressed the need  to bolster «national self confidence» which he said has characterised the country's response to severe challenges from the COVID-19 epidemic to foreign affairs.

Mitsotakis offered his views on  Greek-Turkish relations and stressed the need for the exploratory talks.

He reiterate that Greece welcomes «this resumption of talks after many years because of the security [guararntees] provided by international law and the safety provided by our defence, well versed in our arguments on the sole issue that essentially causes great tensions in our relationship with the neighbouring country, the delimitation of the maritime zones in the Aegean and Eastern Mediterranean, but also with hopes that are grounded in reality and without delusions that will fall into the void,» he said.

There are widespread reservations about the prospect o progress in Greek-Turkish talks as Ankara is stressing that the agenda must include a number of claims that Athens has steadfastly rejection including sovreignty over rock islands in the Aegean and demilitarisastion of many Greek islands.

Turkish Foreign Minister Mevlut Cavisoglu has threatened that if Athens continues to reject Ankara's agenda Ankara has other ways to pursue its agenda, a thinly veiled reference to military force.

In a bid to rally his ministers, MPs and party behind difficult reform programme the PM said that he is pleased with the productivity of the government and the parliamentary group in 2020 «not only becasue of the number of the bills passed but also with the way that parliament and especiallyhis parliamentary group functioned.

In the run-up to the recent cabinet reshuffle pundits and the...