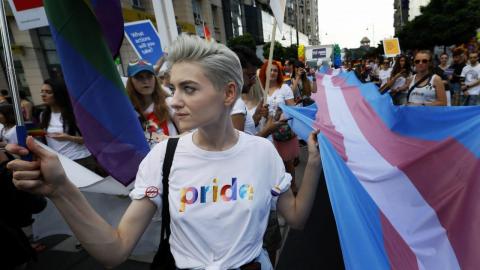 The European Court of Human Rights, ECHR ruled against Romania on Tuesday for failing to satisfy of two transgender citizens' requests for recognition of their gender identity and asking them to "furnish proof that they had undergone gender reassignment surgery".

The found that the Romanian state violated article 8 of the European Convention on Human Rights, which upholds the "right to respect for private and family life".

"The court observed that the national courts had presented the applicants, who did not wish to undergo gender reassignment surgery, with an impossible dilemma: either they had to undergo the surgery against their better judgement… or they had to forego recognition of their gender identity," the ECHR said in a statement.

The judges said that the Romanian authorities' "refusal to legally recognise the applicants' gender reassignment in the absence of surgery amounted to unjustified interference with their right to respect for their private life.

They ordered Romania to pay 8,563 euros in damages to one plaintiff and 7,500 euros to the other, as well as costs.

The applicants, who were named as X and Y by the ECHR, are Romanian nationals who were born in 1976 and 1982 and live in the United Kingdom and Bucharest.

In 2013, X launched a court application against Bucharest's first district, which had refused to change his gender from female to male despite having presented three medical certificates that confirmed he suffered from a gender identity disorder.

The court refused the applications on the basis that the change of gender was premature, as X had not undergone gender reassignment surgery. Higher courts X upheld the judgement and X moved to Britain in 2014 and obtained male forenames by deed poll....