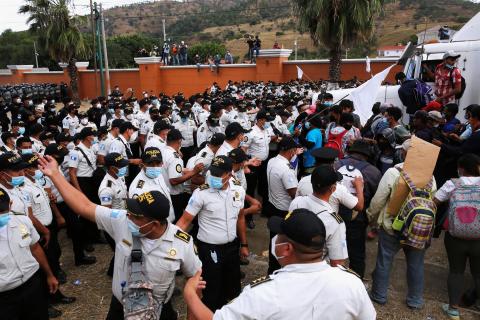 Guatemalan security forces on Jan. 18 broke up a caravan of about 4,000 Honduran migrants trying to reach the United States on a journey of thousands of kilometers through Central America on foot, AFP reporters witnessed.

Police advanced on the group in a coordinated move, striking batons against their shields to make an intimidating noise, prompting the migrants to scatter.

The group was still on Guatemalan soil, and some regrouped to resume their quest for a better life further north.
Thousands of others began returning to Honduras after clashing with the police.

Angie, a 21-year-old Honduran migrant, told AFP she was returning to Honduras to try and officially document her entry into Guatemala, as well as presenting a negative COVID-19 test, one of Guatemala's requirements for crossing its borders.

"I want to continue to the United States, I don't want to stay in Guatemala," she said.

The caravan, which departed Honduras on Jan. 15, has been held up since Saturday at the town of Vado Hondo in southeast Guatemala, some 50 kilometers (31 miles) inside the border.

They have been waiting to pass, sleeping outdoors and blocking a key road where a massive logjam of cargo trucks has built up as a result.

As the migrants retreated before the advancing security forces Monday, several threw stones at police.

The officers responded with tear gas as they attempted to drive the group back towards the Honduran border, thus clearing the road for trucks.

Women carrying small children were among those to flee before the police.

"I am going with my son, in Honduras I have nowhere to live," a woman told the Guatevision channel, catching her breath after a brisk run.