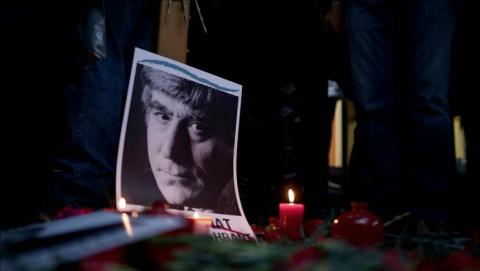 Hrant Dink, a prominent Turkish-Armenian journalist, was remembered on Jan. 19 14 years after he was assassinated.

Born in Turkey's eastern Malatya province in 1954, in 1996 Dink established the Agos newspaper in Istanbul, a publication that since has been published in both Armenian and Turkish. He also acted as the paper's editor-in-chief.

On Jan. 19, 2007, Dink was assassinated by Ogün Samast on Halaskargazi Street, a busy thoroughfare in Istanbul's Şişli district.

Fleeing the city after the murder, Samast was caught the next day by police in the Black Sea province of Samsun.

FETÖ tried to overthrow the Turkish state on Dec. 17-25, 2013 - a precursor to its defeated 2016 coup - the legal process regarding Dink's assassination took on a new dimension.

Through deeper investigation, Turkish judicial and security authorities discovered a FETÖ connection behind the assassination.

According to an indictment by Istanbul prosecutors, Dink's assassination constituted an important milestone which sparked a series of events leading to the defeated coup of July 15, 2016.

The assassination, planned by the FETÖ terror group, intended to undermine Turkey's standing in the international community, the indictment said.