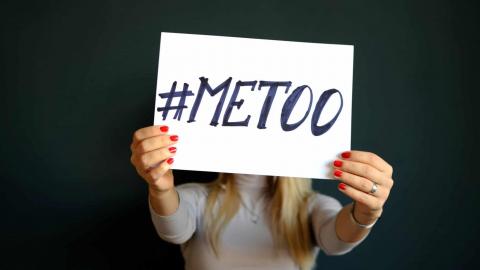 The HSF's own response, in which it called on Bekatorou to "be specific", has further angered the Greek public. Two board members stepped down in protest while the Stravros Niarchos Institute, a high-profile donor to the HSF, has suspended its support.

A number of other women, including athletes, have since spoken out to share their own experiences of sexual harassment, taking to social media throughout the weekend.

On Monday, the rector of Thessaloniki University asked prosecutors to investigate multiple allegations of sexual harassment made online against a professor at the university, while Bekatorou's fellow sailing Olympian Nikos Kaklamanakis told television that "there are more girls who have faced this nightmare" and denounced the HSF.

Allegations like those levelled by Bekatorou are necessary "to break the wall of silence and fear," said Olga Kefalogianni, an MP of the ruling conservative New Democracy party.

"They invoke society to wake up and universally address the most traumatic form of insult to an individual's personality, sexual abuse that has no place in any society," Kefalogianni told BIRN.

Surveys suggest the problem is widespread in Greece.

According to the results of a study published in November last year by the NGO ActionAid, nine out of 10 women say they have faced some form of sexual harassment at the workplace. One in five say they do not feel safe at work and 80 per cent fear being fired if they report sexual harassment.

ActionAid gender manager Matta Samiou said it was difficult to get employers or unions to even discuss the issue. ...

Bulgaria is One the Countries with the Oldest Population in the EU
Culture Minister Gheorghiu: Many heritage buildings need prompt intervention
Greek islands would pass into the hands of Turkey overnight, Turkish expert claims on CNN Turk