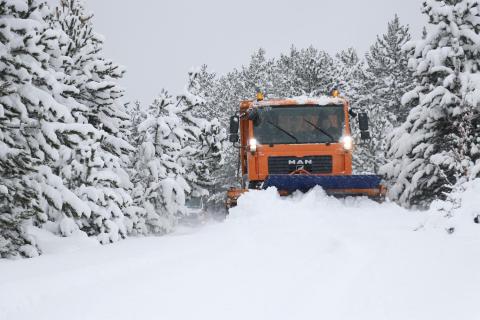 The Turkish State Meteorological Service has warned the residents of Black Sea and Mediterranean coasts, eastern provinces, Istanbul and the capital Ankara for rainy weather conditions.

"Heavy rain will continue on the Mediterranean coasts and in the southeast region. The Blacksea provinces and the capital Ankara will experience heavy snow," State Meteorological Service stated.

"Temperatures will stay around 4 to 8 degrees Celsius below the seasonal norms across the country," the officials said.

Istanbul Governor's Office warned the residents of the metropolis for the likelihood of frost today after three days of heavy snow.

"Be aware of the icy roads," the officials warned people.

Incessant rain and snow filled the dams of Istanbul, which has been dealing with severe drought conditions lately.

The water levels of the dams from previously recorded 19 percent have skyrocketed to 30 percent after months due to continuous rains.

Due to heavy fog, vessel traffic in Bosporus Strait was shut down late Jan. 17, the officials said.

Marine traffic in the Bosporus has been suspended as visibility is below a half mile, the Transport and Infrastructure Ministry's Istanbul Port Directorate said in a statement.

All vessels passages from both directions were suspended as of 10:15 p.m. local time (0715GMT).