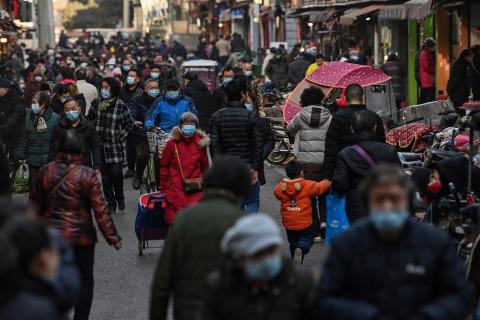 China and the World Health Organization could have acted faster to avert catastrophe during the early stages of the coronavirus outbreak, a panel of independent experts has concluded.

The Independent Panel for Pandemic Preparedness and Response said its evaluation of the start of the crisis in China "suggests that there was potential for early signs to have been acted on more rapidly".

Containment measures should have been implemented immediately in all countries where transmission was likely, the panel said in their second report, due to be presented to the WHO's executive board on Jan. 19.

COVID-19 was first detected in the central city of Wuhan in late 2019 before seeping beyond China's borders to wreak global havoc, costing more than two million lives and eviscerating economies.

The panel said it was clear that "public health measures could have been applied more forcefully by local and national health authorities in China in January".

The report also criticised the WHO for dragging its feet at the start of the crisis, pointing out that the UN health agency did not convene its emergency committee until January 22, 2020.

And the committee failed to agree to declare the outbreak a Public Health Emergency of International Concern (PHEIC) - its highest alert level - until a week later.

"It is not clear why the committee did not meet until the third week of January, nor is it clear why it was unable to agree on the (PHEIC) declaration... when it was first convened," the report said.

The WHO has already faced claims it was too slow to declare an international crisis, to acknowledge the virus was spreading through the air, and to recommend face masks.