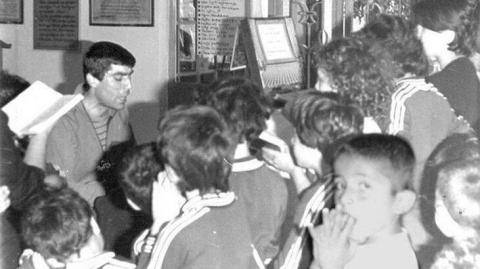 An Armenian orphanage in Istanbul's Tuzla district where the slain journalist Hrant Dink grew up will be turned into a youth camp thanks to a decision taken by the city's municipal council.

The municipal council has unanimously passed a proposal to build a youth camp on the grounds of the Gedikpaşa Armenian orphanage, also known as Kamp Armen, allowing social and cultural facilities for the site with the zoning change it made.

The orphanage was built in 1962 by the Gedikpaşa Armenian Protestant Church, as a former building on the site could not host the increasing number of Armenian students arriving from various parts of Anatolia.

During the summer of 1962 and afterwards, Armenian orphans, between the ages of 8 and 12, worked in the construction of the buildings at the camp.

Known as the orphanage where Dink, and his wife, Rakel Dink, met, studied and grew up, the orphanage was expropriated by authorities in 1987 on the basis of a 1936 bill preventing minority foundations from acquiring property.

"We have turned that flat barren land into a place that is getting greener and more colorful. We went to live a camp life, we built camps and returned to our boarding school that summer," Dink had written in a column in 1996, describing the days when they built the camp in the 1960s.

As the legal process and the lawsuits took years, in 2007, Dink was gunned down in broad daylight in front of his office in Istanbul before seeing the verdict of the court regarding the orphanage.

Although the Turkish government signed a decree in 2011 to return property taken away from minority foundations in the past, Kamp Armen was omitted, alongside hundreds of other properties across the country.