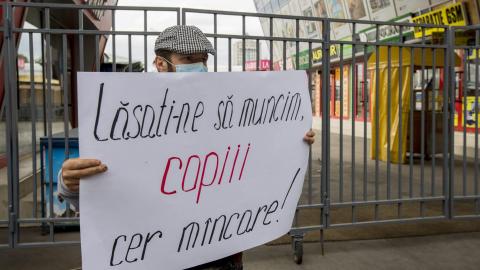 And, as a parliamentary republic, the prerogatives of the new president are limited. Without the support of a parliamentary majority, which would then form a pro-European government, Sandu's political agenda will continuously be countered by Dodon and the PSRM.

Sandu claims the current parliamentary majority is no longer representative of the country, and that "today in parliament there are not 51 well-intended deputies" out of 101. She says pro-European forces cannot install a government in these circumstances.

"The shortest path to early parliamentary elections is the resignation of [PM] Ion Chicu's cabinet. I told him this - and he agreed with me," Sandu told a political talk show broadcast by cotidianul.md on December 10.

There are three scenarios by which parliament can be dissolved: if a majority in parliamentary votes for it; if the government resigns; or if parliament is totally inactive for three months and does not vote on any laws.

Sandu and the pro-European forces are pushing for the dissolution of the current parliament and for snap elections in the hope of the assembling a new pro-European majority.

But this scenario is problematic. Even if they succeed, most polls suggest that, apart from the Action and Solidarity Party, PAS, no centre-right forces will cross the 6-per-cent threshold needed to elect MPs.

The same surveys show that the Socialist Party, Our Party and the Sor Party, all of them with leftist and pro-Russian views, would all cross the threshold into parliament.

Legacy of laws rushed through by Socialists

The year 2021, therefore, promises to be a challenging year for Sandu and the pro-European forces.

The deputies of Socialists Party vote...